This EverydayNile story was supported by InfoNile with funding from IHE-Delft Global Partnership for Water and Development.

As I grew into an adult, I gradually saw the yellow lights turn to white, but I never took note of this seriously. But two years ago, when going for a walk on the shores, I met one of the fishermen tying a light on one of the floating frames. I noticed the light being used was different from the kerosene-powered lamps. He was using a solar-powered lamp to fish. Being a conservation storyteller, this hit a light bulb in my mind. Clearly, my community was mitigating climate change in its own way. This was very humbling and inspiring. 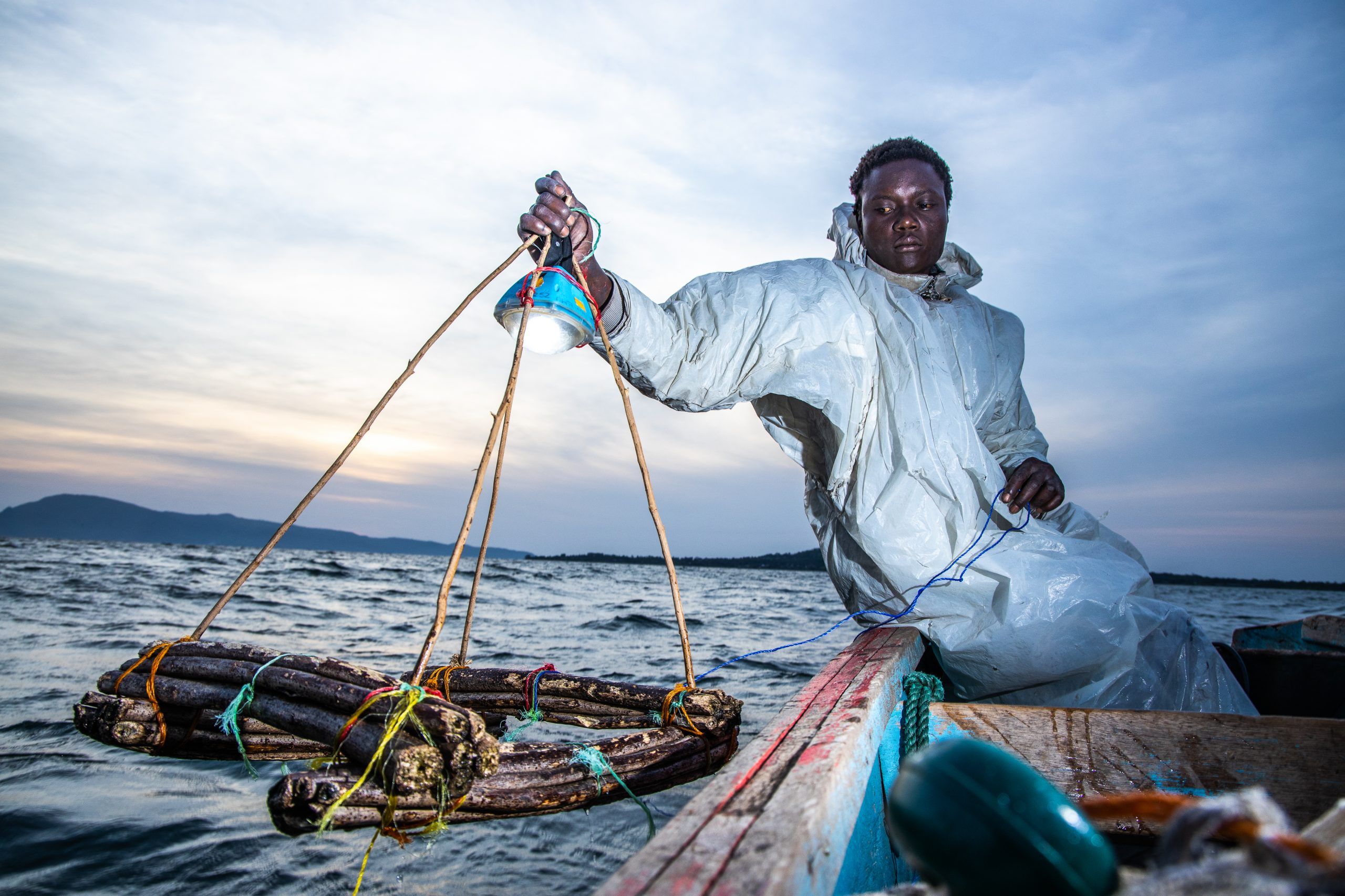 Odongo Eric, a fisherman from Rusinga Island, Lake Victoria in Kenya, uses a solar-powered light to capture silver cyprinid fish one night in May. Odongo has been fishing for five years. He recently switched to fishing with solar lamps instead of kerosene in an attempt to reduce his carbon footprint and be part of the global climate change mitigation movement.

A kerosene lamp floating on a fishing stand, Lake Victoria. The lamp produces yellow light from burnt kerosene, which is derived from petroleum, a fossil fuel. When the fishermen relied on kerosene, the light would last only for a few hours, and they had to check and refill the lamps when they were in the water. Now, the solar lamps can last the whole night. 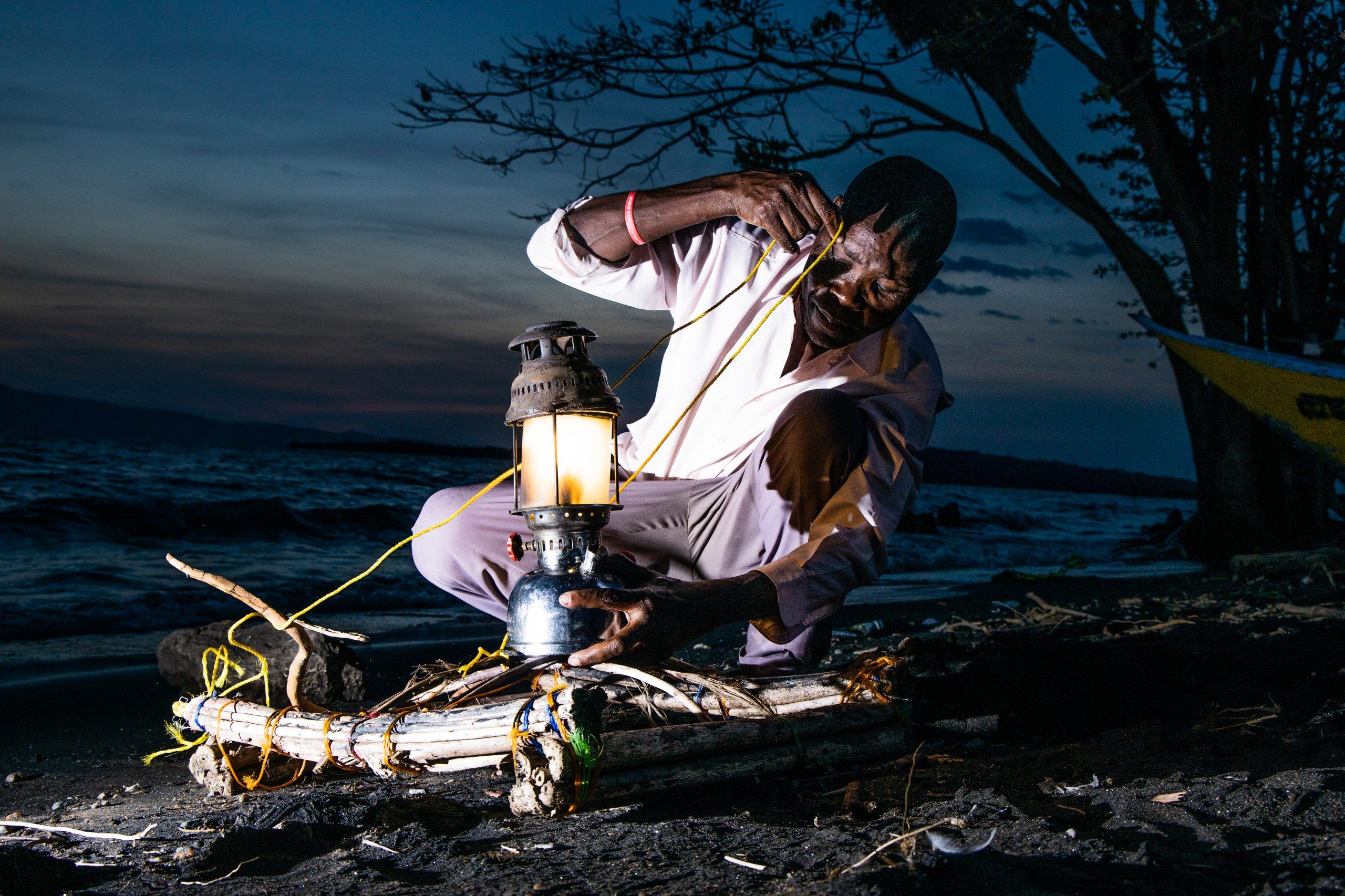 Michael Kepha, the former Beach Management Unit Chair, fixing a kerosene lamp to show me the effort it used to take the fishermen to light their lamps. It took him 30 minutes to light just one kerosene lamp. Now with solar, all the fishermen have to do is switch a button to turn on the light. Kepha was very cautious that the fire did not burn him in the process of lighting the lamp. 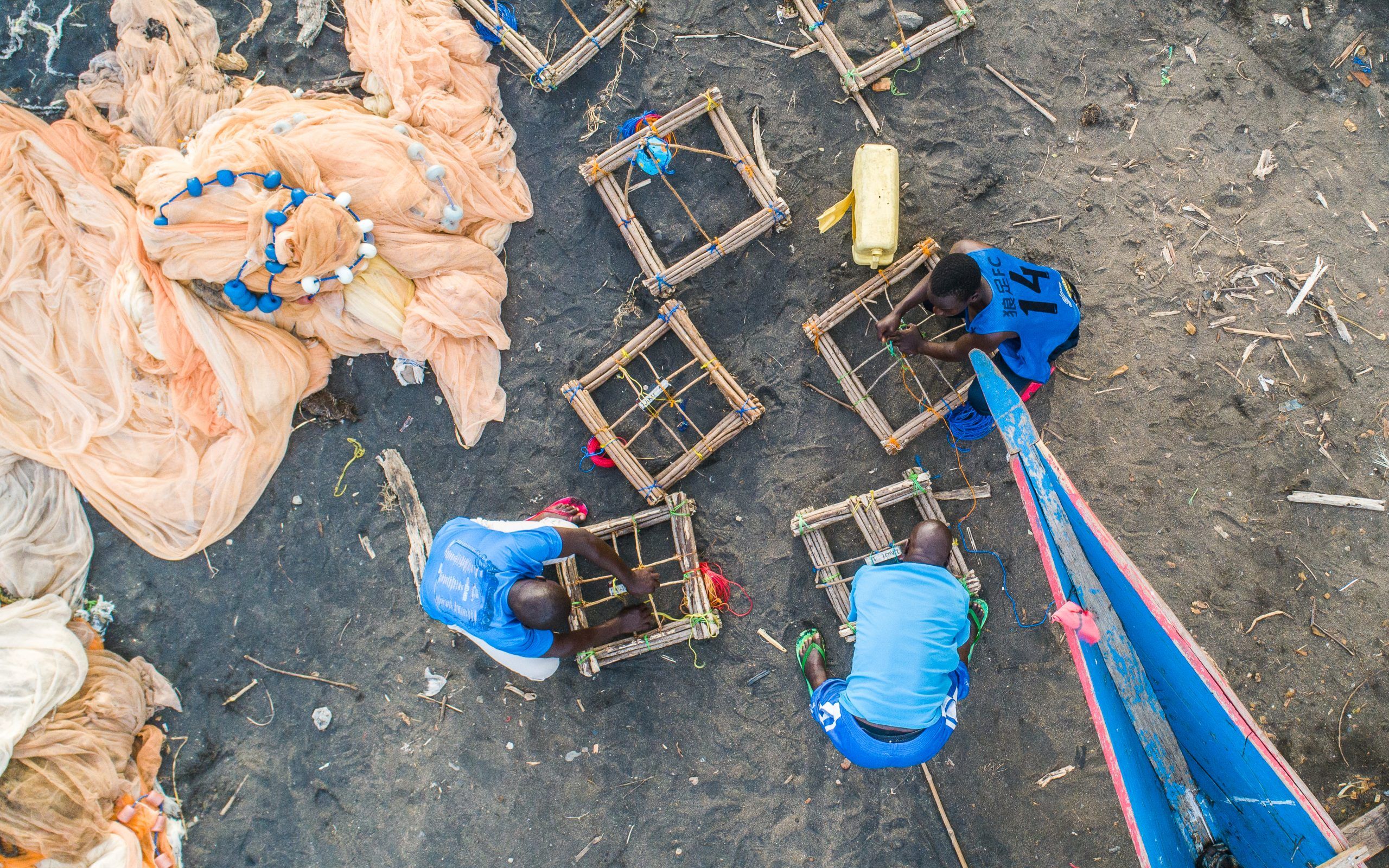 An aerial view of fishermen fixing the lamps on the stands before getting ready to go fishing. The stands float alone out in the water to attract the small silver fish, which the fishermen then come and collect using nets. After leaving the lights out in the water, the fishermen circle back and check on them every hour to retrieve the fish. 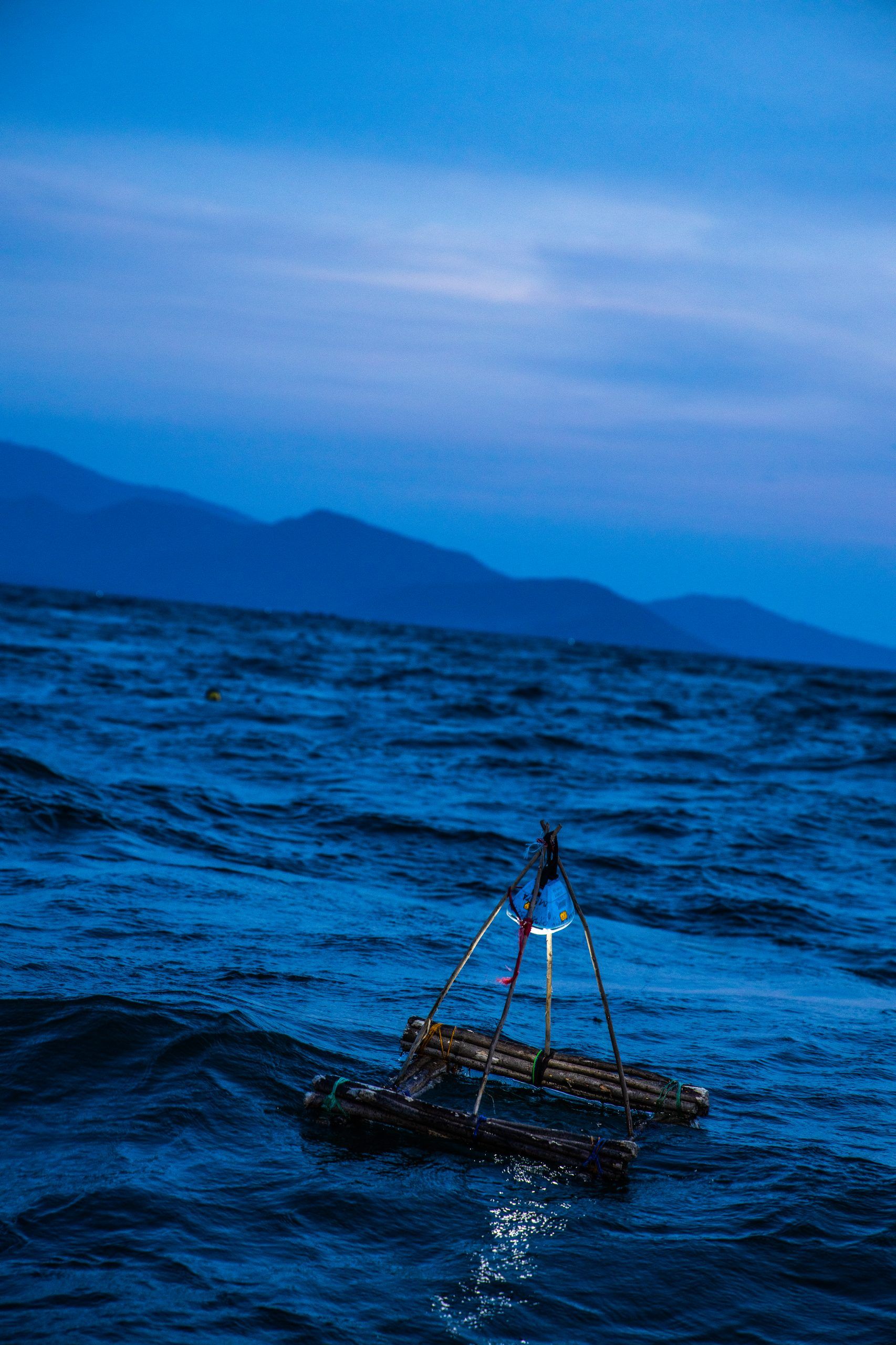 A solar-powered light floating on a fishing stand, Lake Victoria. The solar-powered lamp can be delineated by its white light, as opposed to yellow light, which is produced by kerosene lamps. 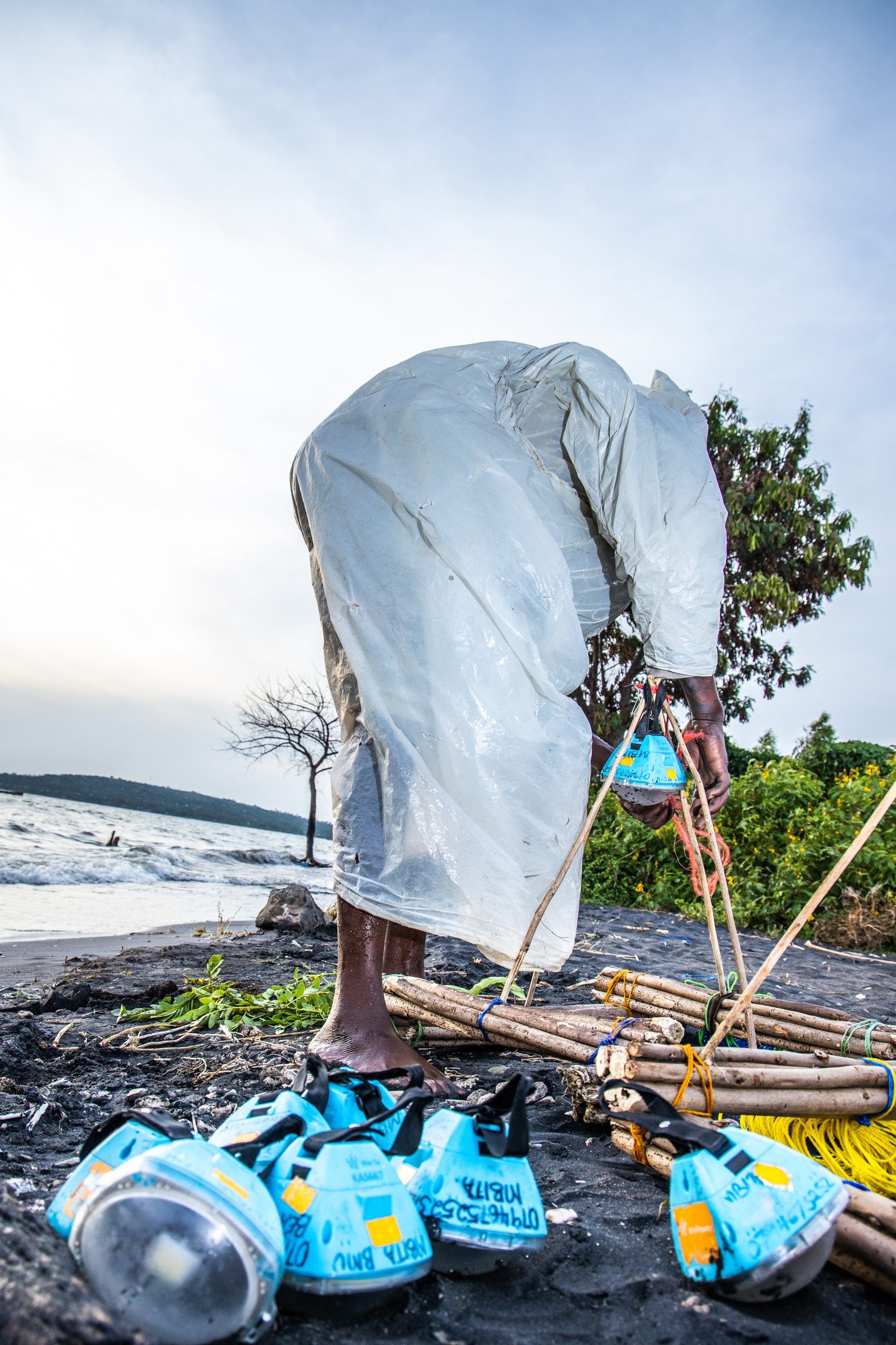 At around 5-6 pm in the evening, Odongo the fisherman puts together all the solar lamps before heading out fishing. It takes the fishermen about 20 minutes to prepare the boats and mount the lights. Then, they will stay out on the lake all night until morning, only coming back to shore at dawn. There are about 300 fishermen who live and work on Rusinga Island. All are now using solar lamps. 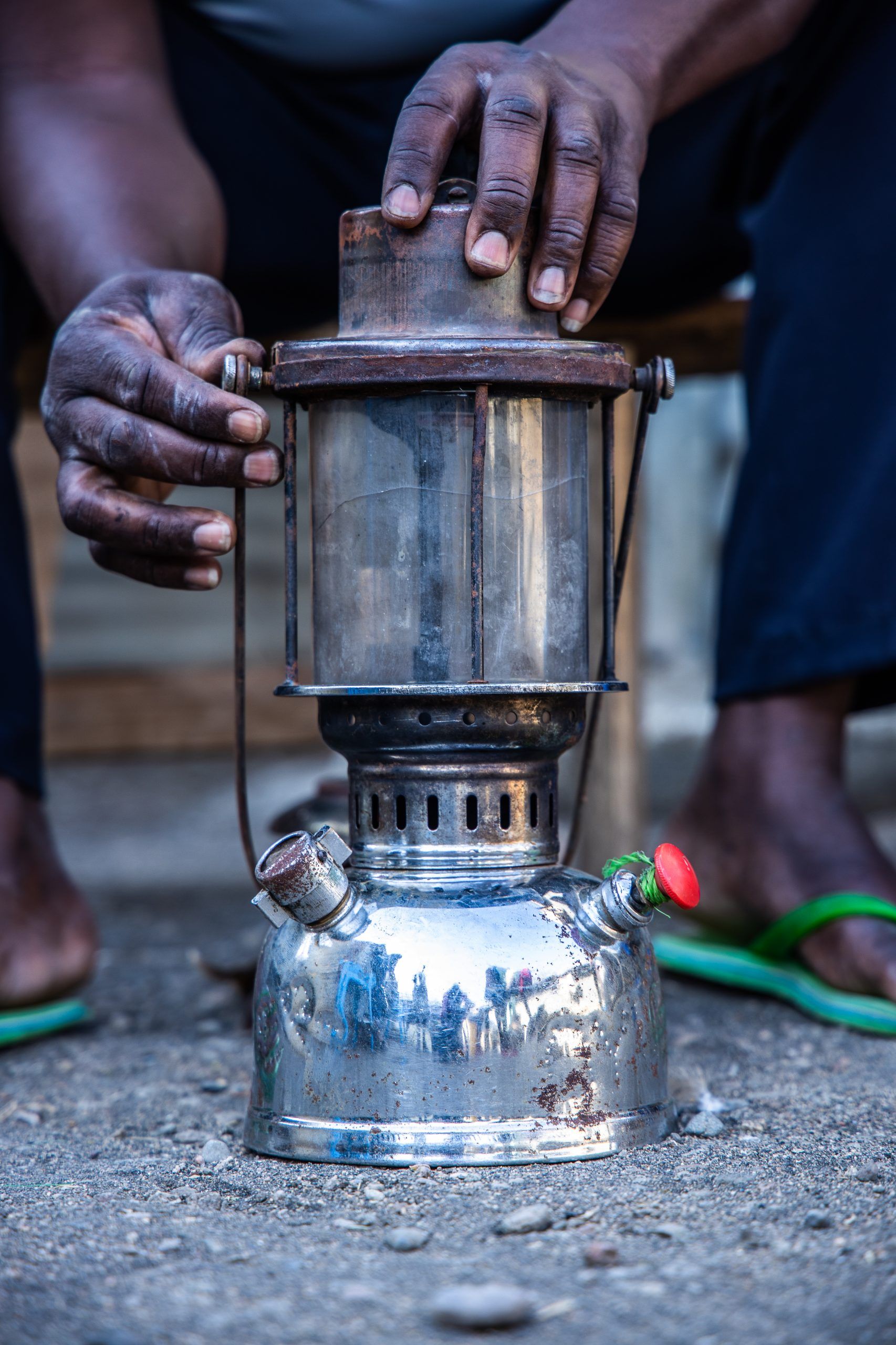 A traditional kerosene lamp, which took more than 30 minutes to light before the fishermen switched to solar 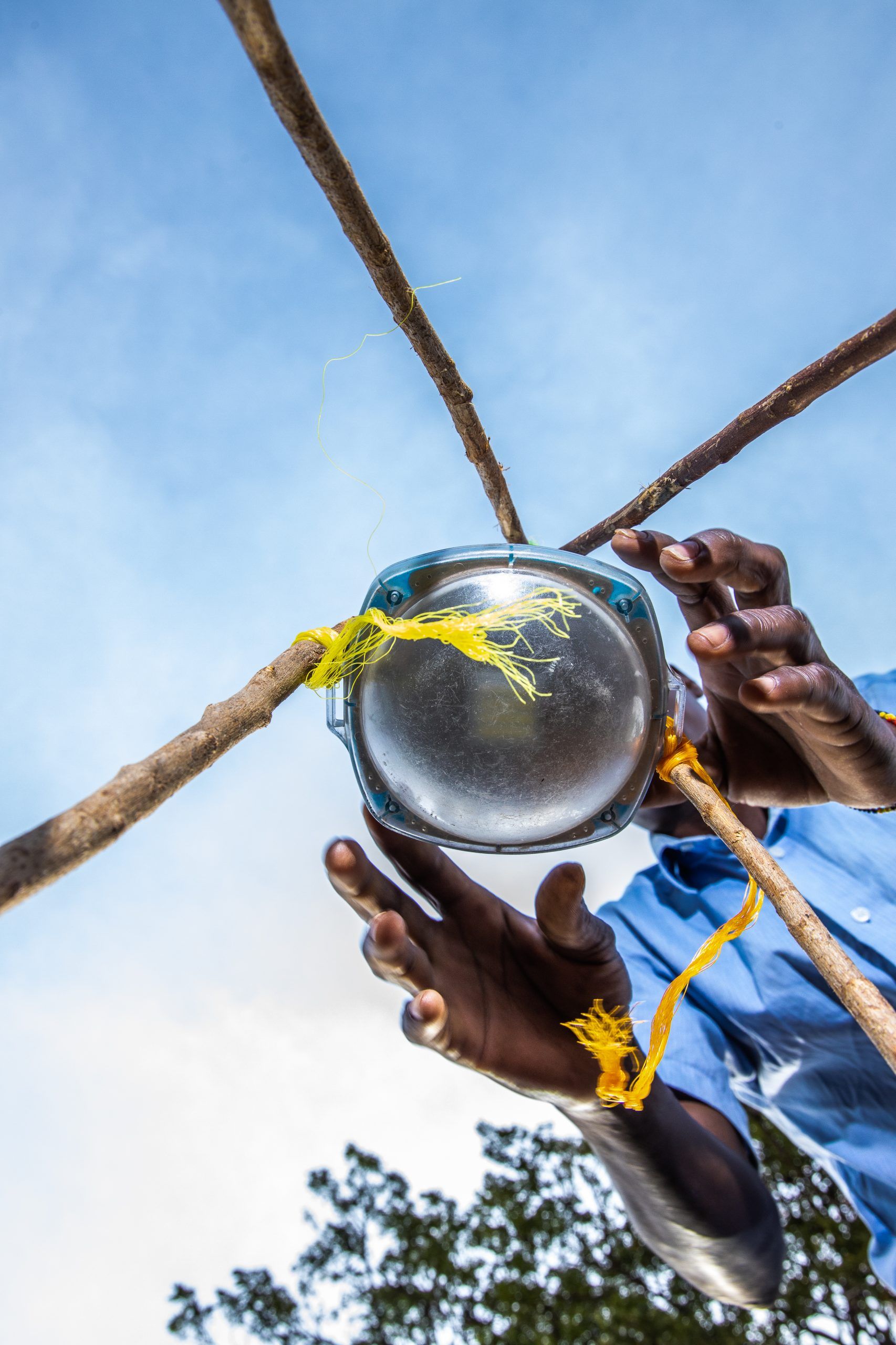 A solar lamp being fixed by fisherman Odongo Eric at the lake shores on Rusinga Island. The fishermen make the stands using a light tree branch. Each squad of fishermen will handle about 10 light stands each night. 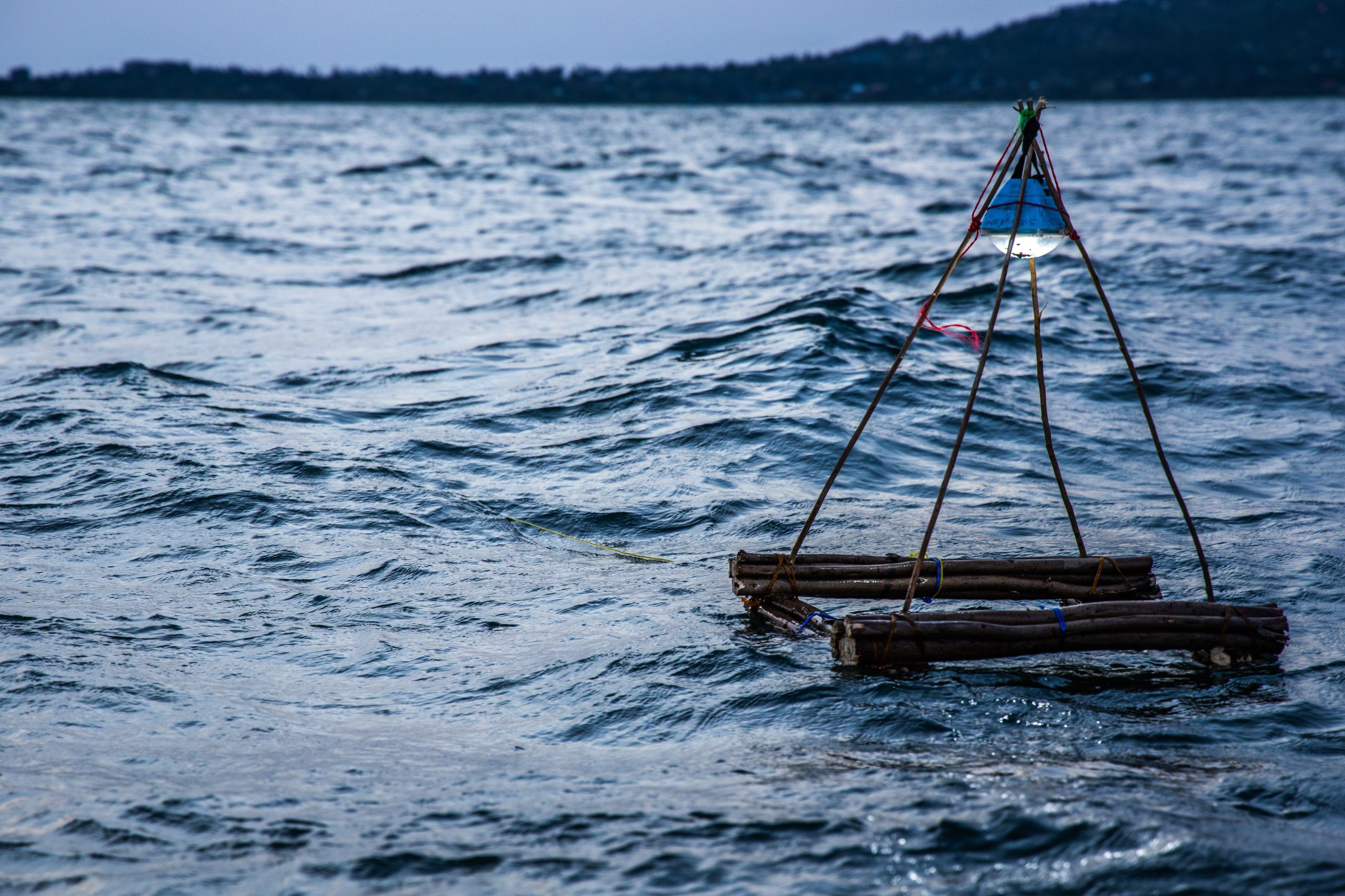 The floating solar-powered lamp in position to attract the silver fish. The lamps are placed just after sunset to provide light that attracts the silver fish to the surface. Later, the fishermen spread their nets below the light to catch the fish. 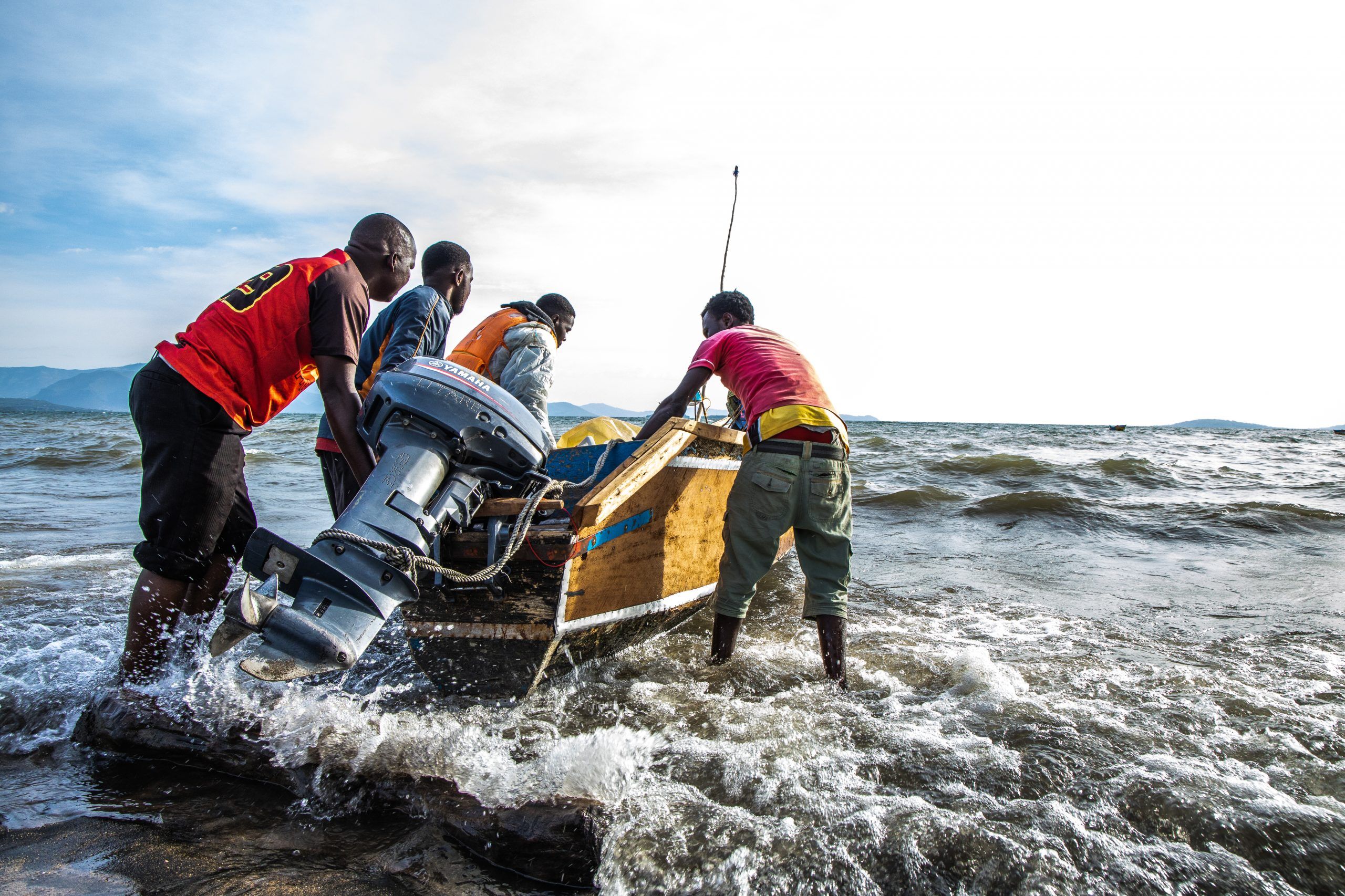 A fishing squad sets off to the lake, the boat powered by petrol. However, the fishermen are moving to use electric-powered engines to go completely green. In May, a group of fishermen was testing out a set of electric engines for the first time 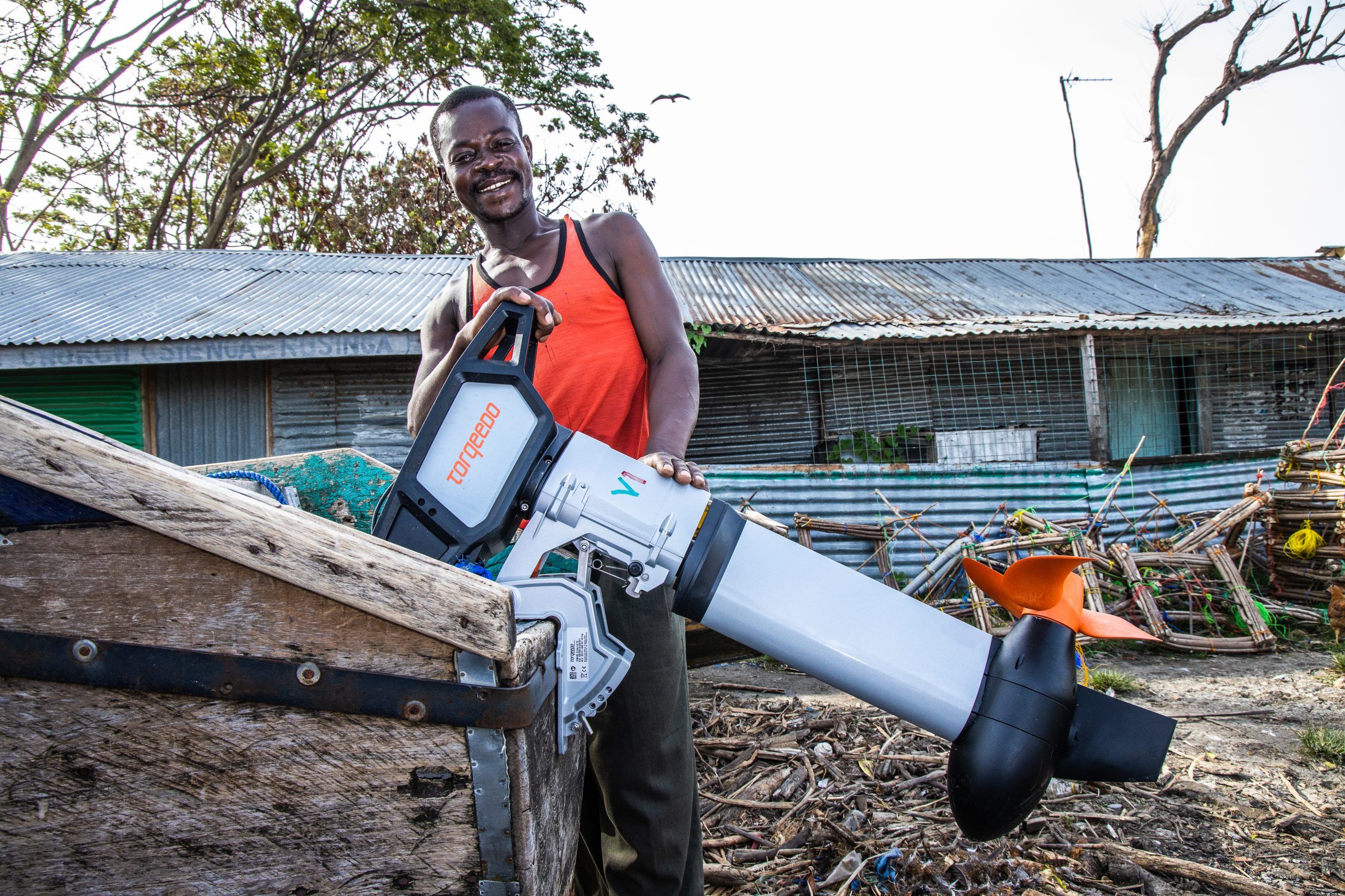 A local fisherman poses with an electric engine that was being tested during the photographer’s visit to the village. 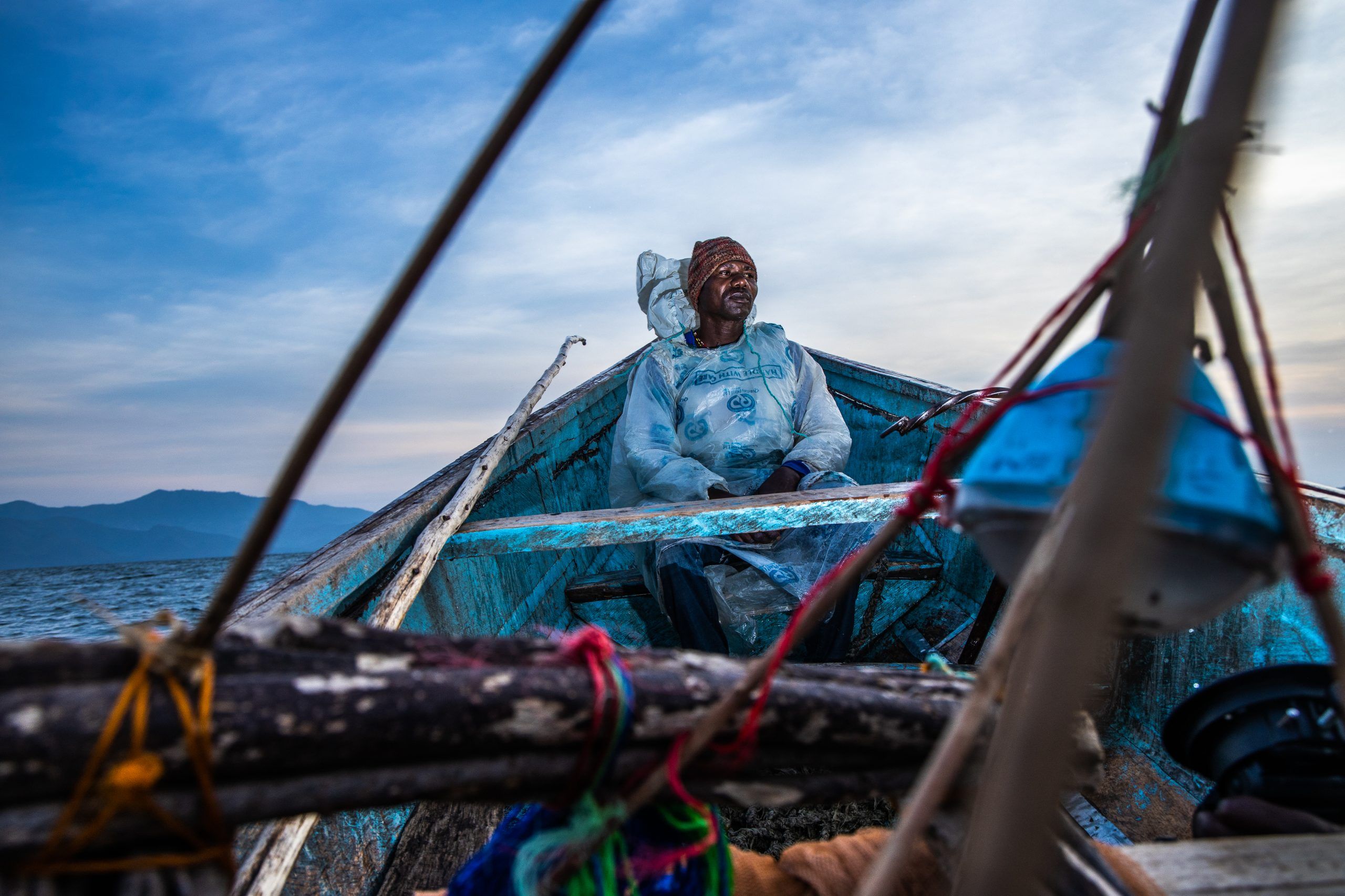 Otieno Ngare, a member of the same fishing quad with Odongo, views the lake shore as the fishermen set off for a whole night on the water. Four to five fishermen generally share each boat. About 10 teams go out at a time, mostly on the darkest nights of the moon cycle. 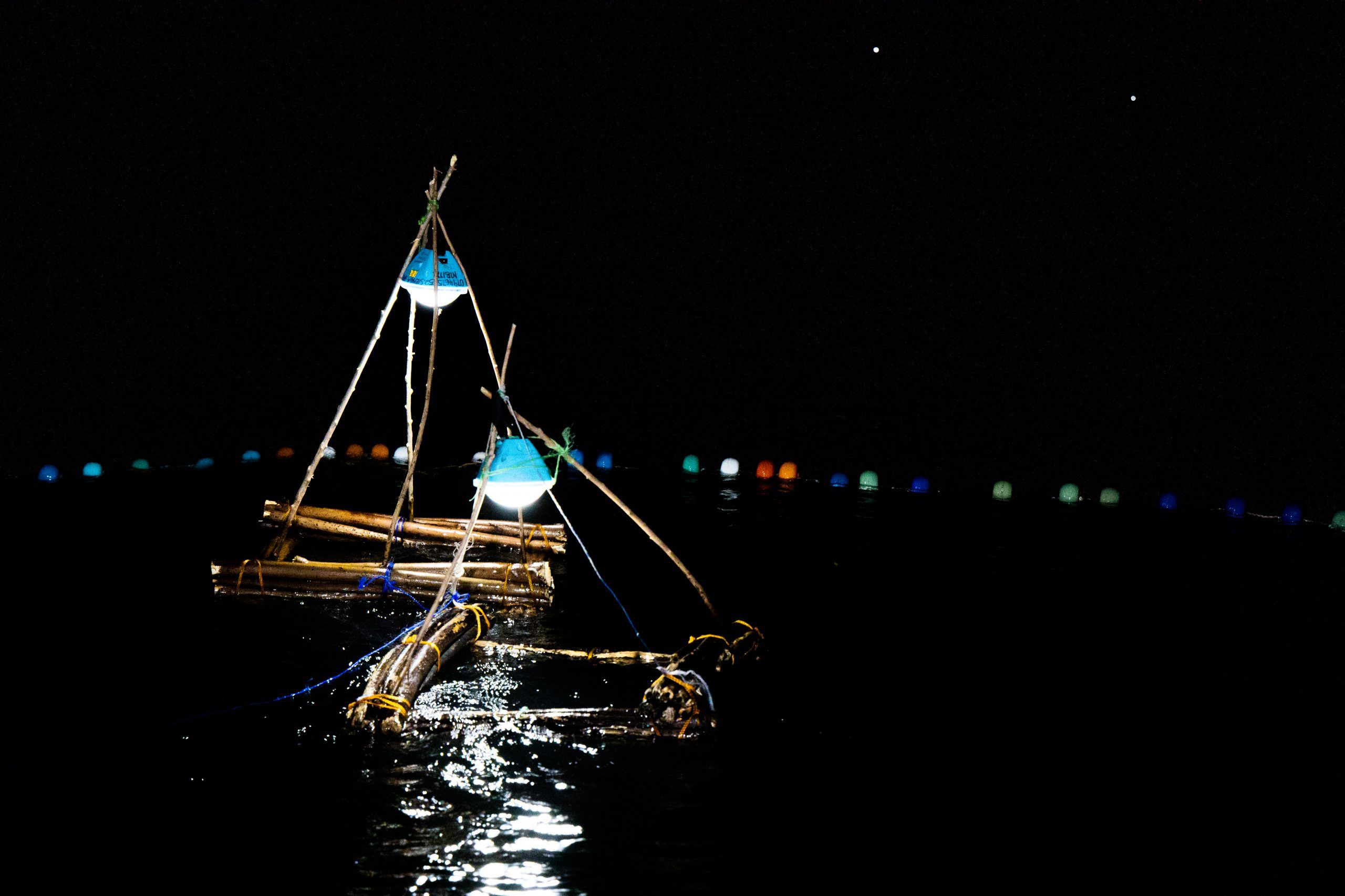 Two solar-powered lights floating on the lake, as the fishermen cast their nets to catch the silver fish. The catch was small this May evening and sold mainly to locals as a source of household food. During the high catch periods, some fish is also sold to animal feed companies in Nairobi.

At around 11 p.m., Otieno Ngare retrieves his casted net out from the lake containing some silver fish. He will revisit the lamps every hour to check for fish. 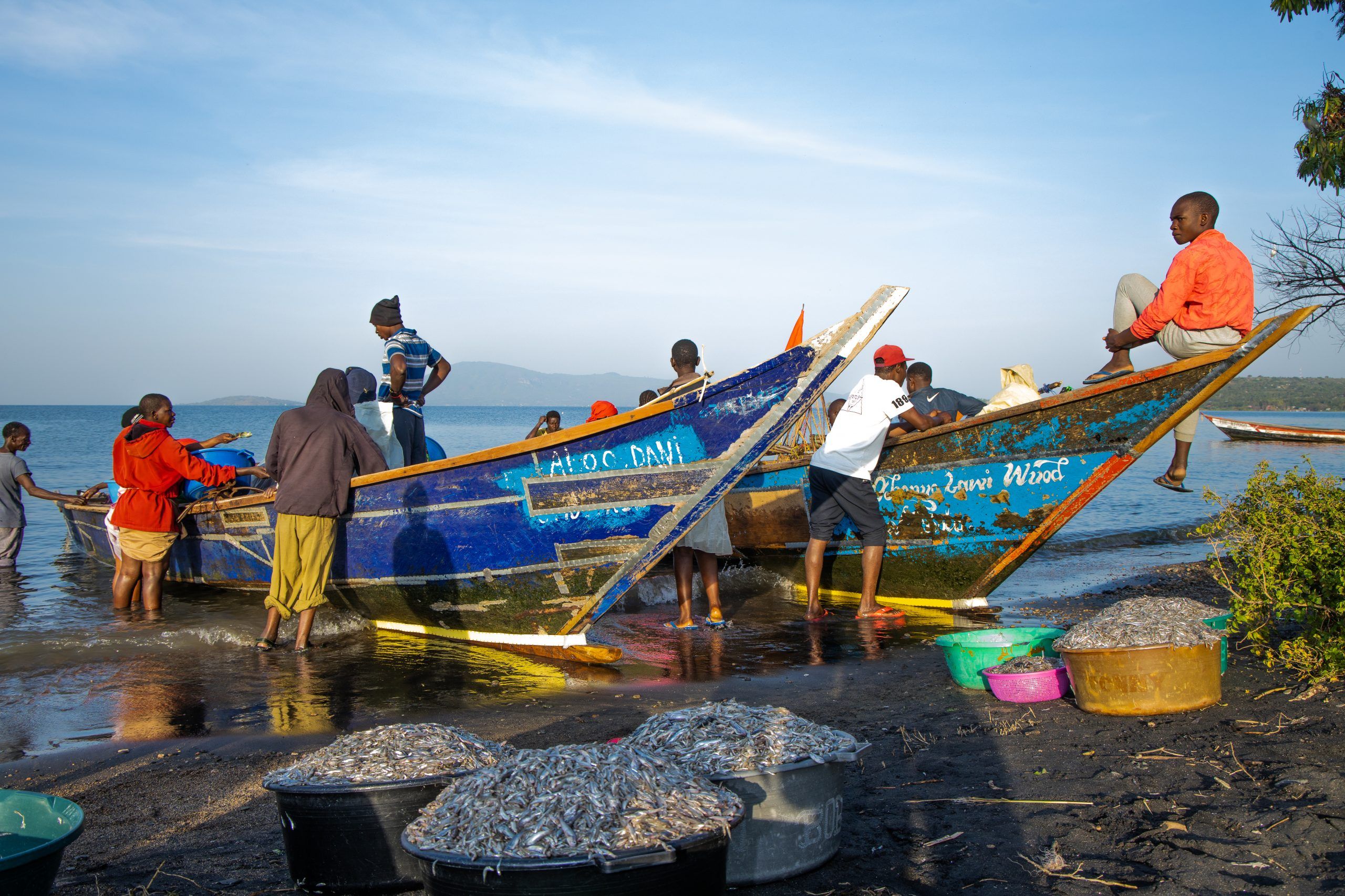 Fishermen and market women meet in the morning to sell their catch to buyers at the lakeshore on Rusinga Island. In recent years, the silver fish catch has been low. Even though solar lights have improved the efficiency of the fishing process, the increased pressures on the lake from climate change, pollution, and overfishing have reduced the fish catch, according to island fishermen. 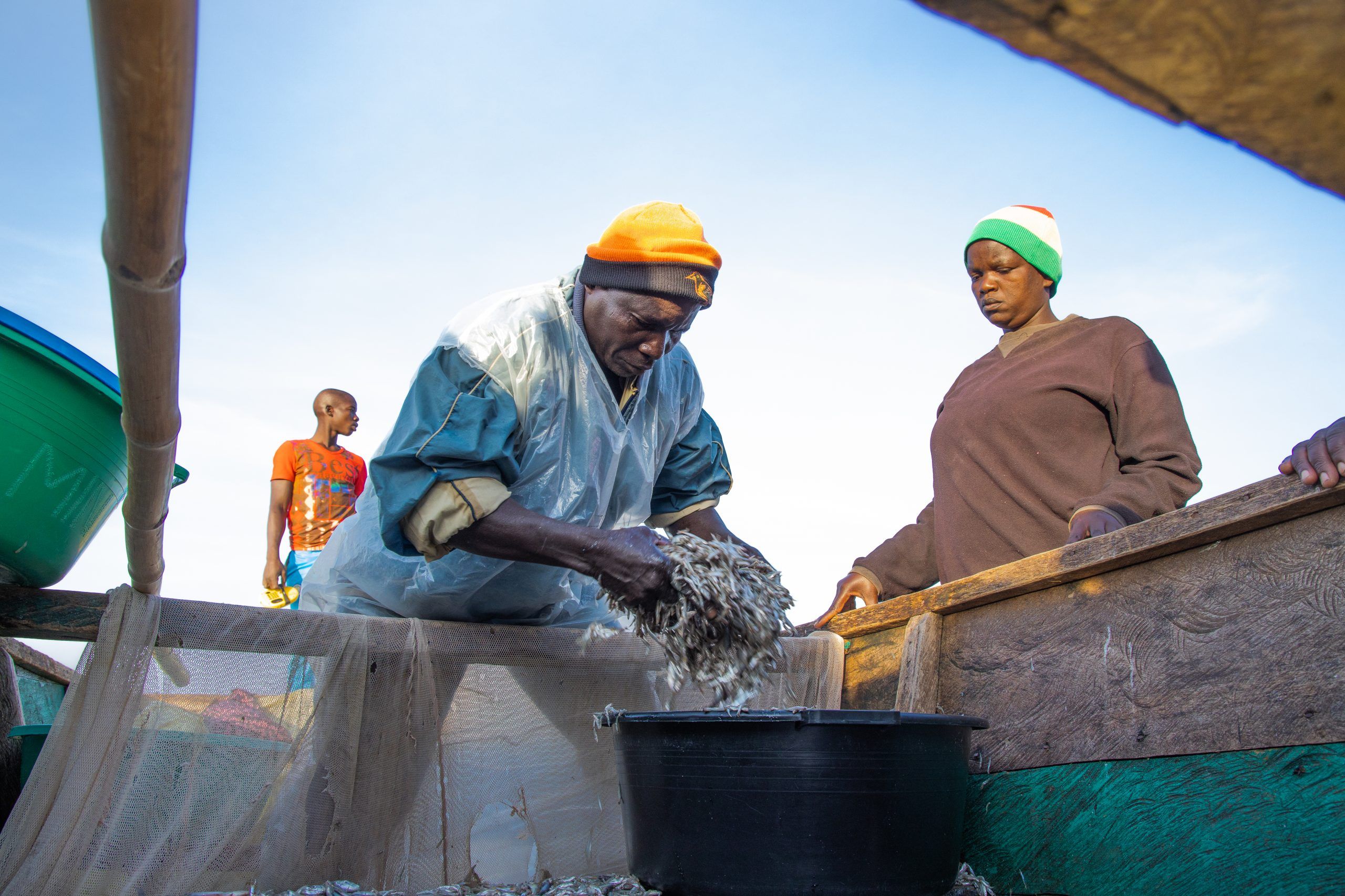 A fisherman measuring his catch to a potential buyer. 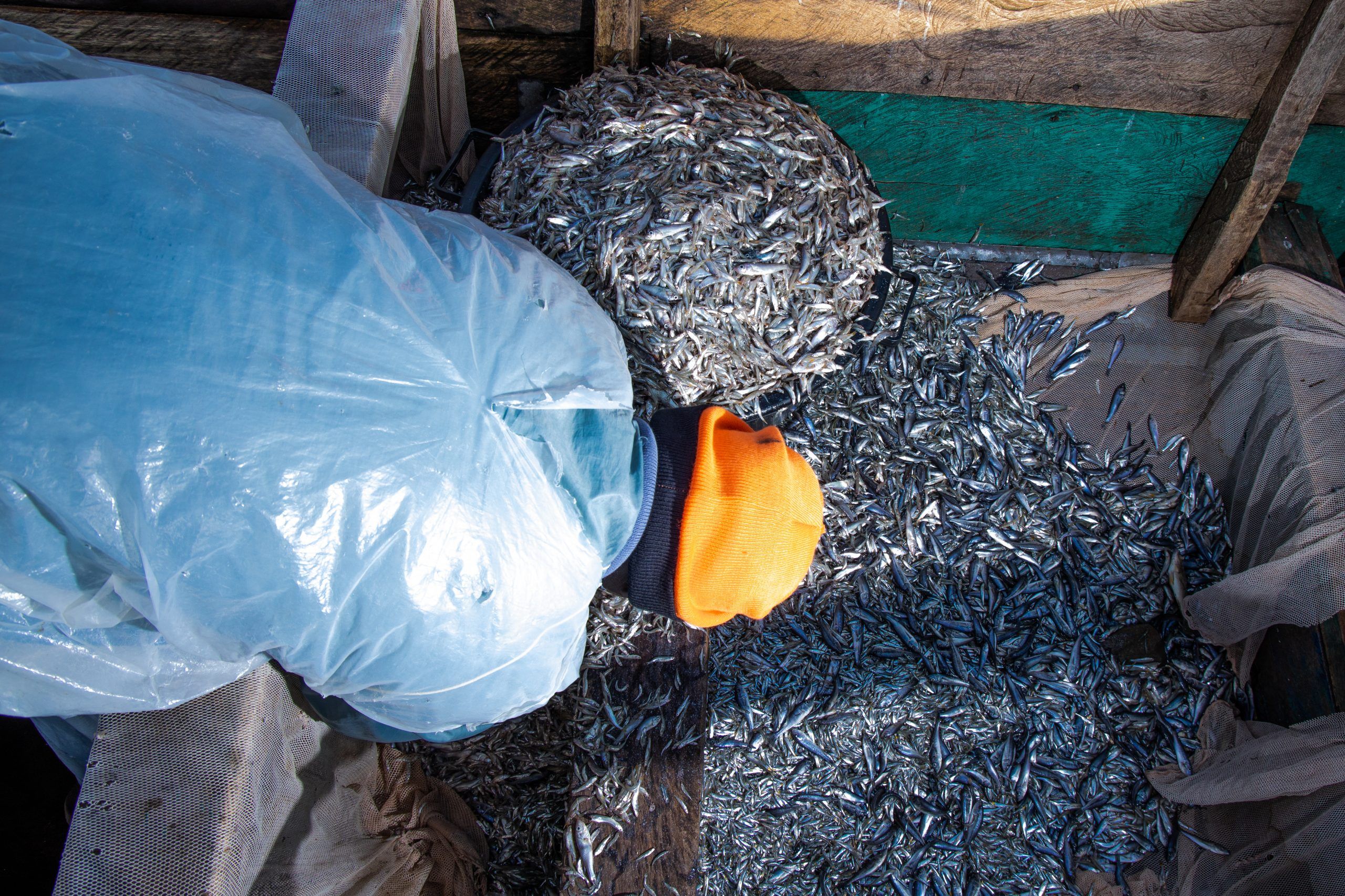 A fisherman selling his catch after a whole night fishing. 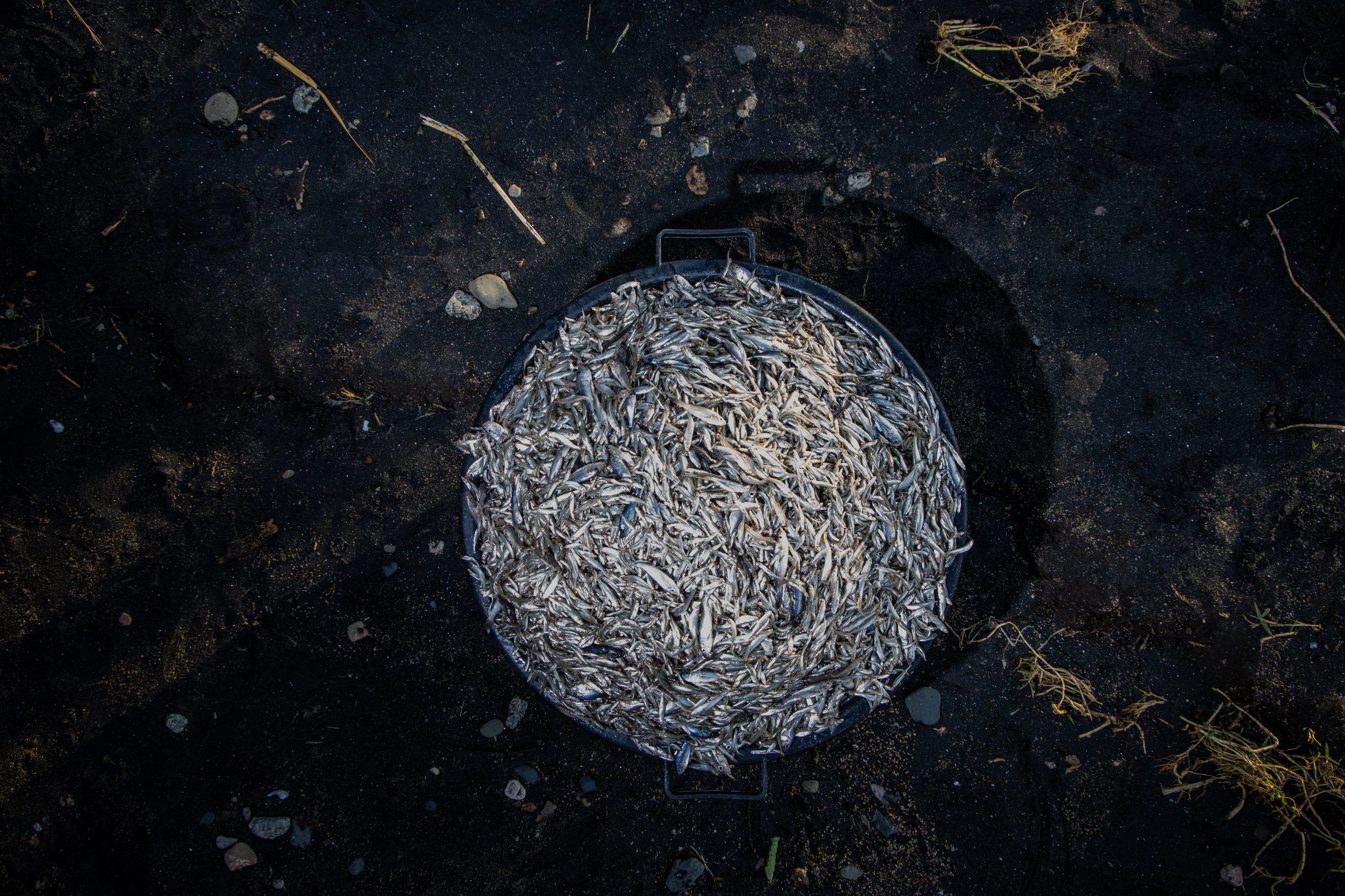 The fishermen sell the silver fish in basins. This amount would cost approximately KES 1,500 (USD $15). 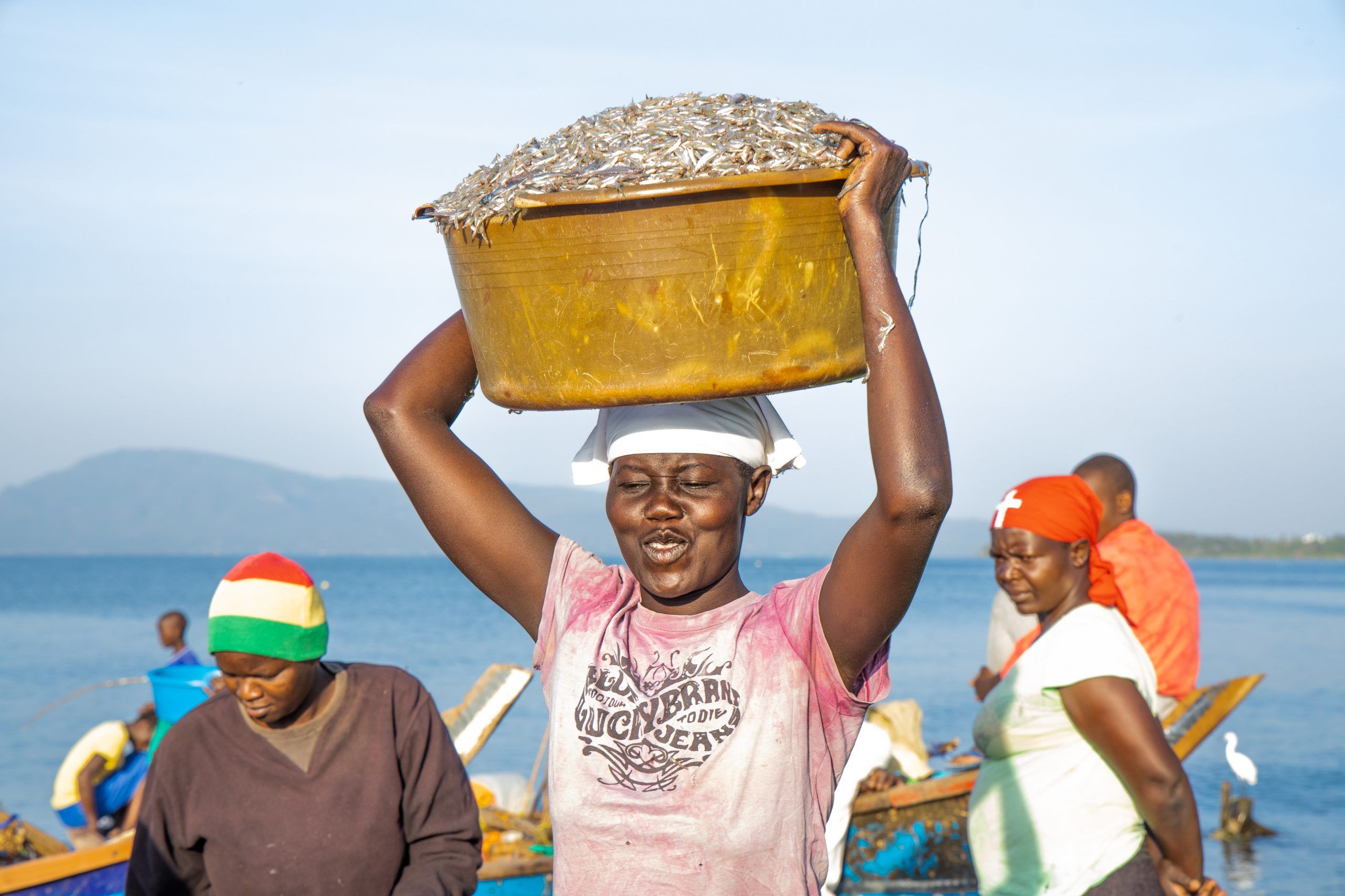 Nyakandito, a fishmonger from the island, carries the wet silver fish to be dried before taking it to the market. 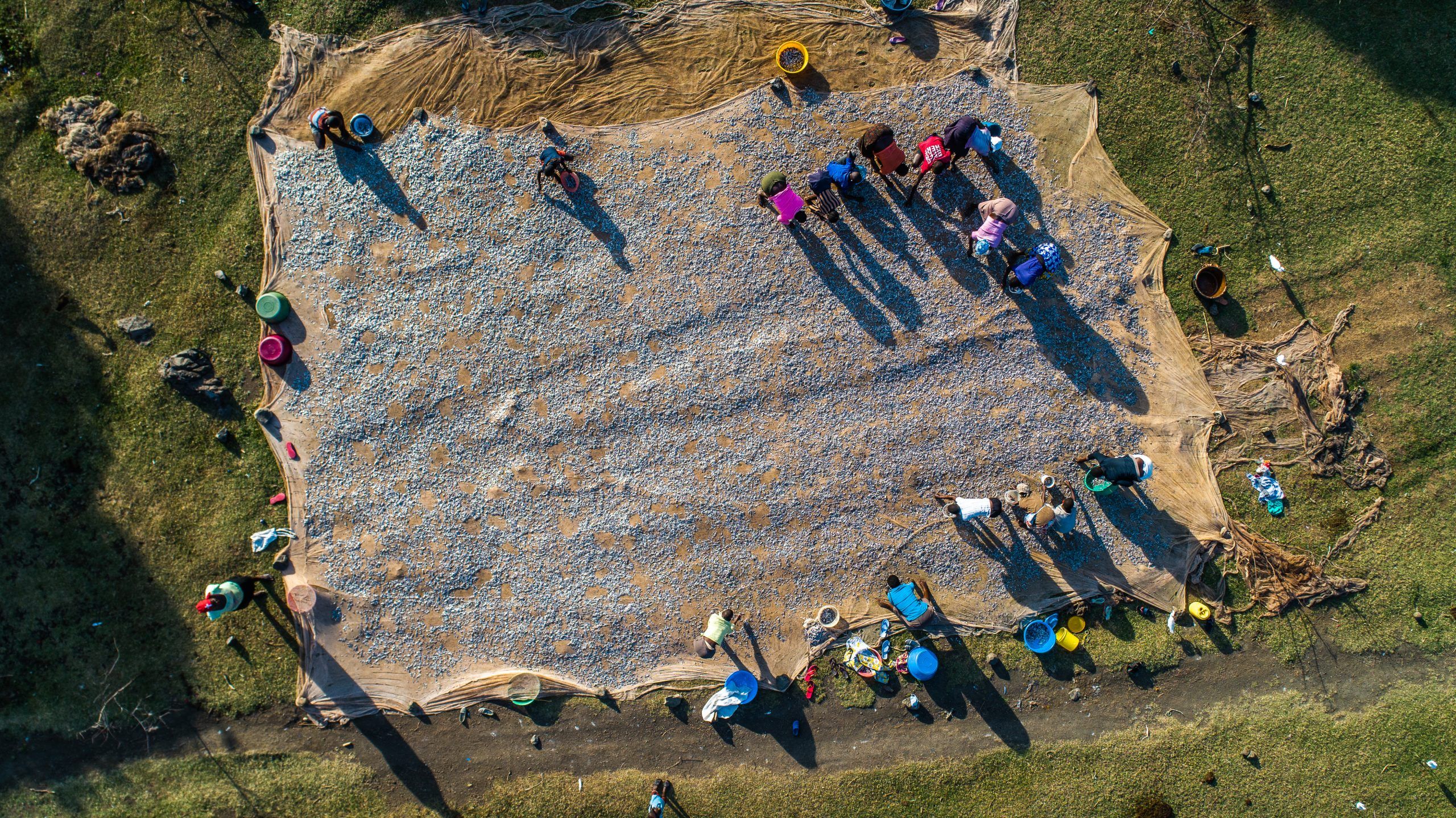 At around 7-8 in the morning, women from the village dry the silver fish before it is taken to the market. 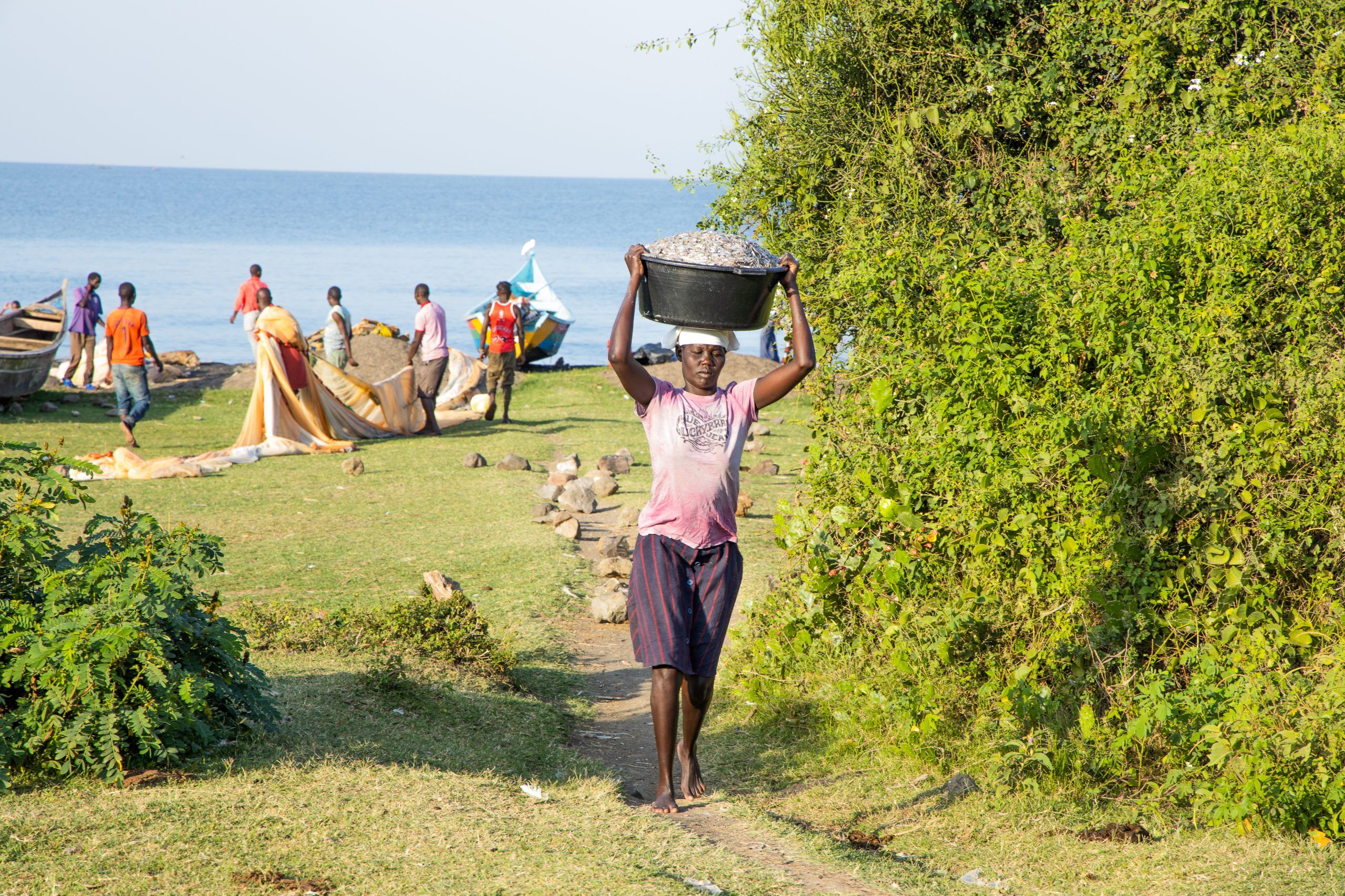 It is the end of one night of fishing, and the fishermen go home to rest as they wait for the evening to fall again.

A platform for sharing stories that enables relevant knowledge sharing of everything nature and wildlife through photography, film and science.

This is a huge milestone to @tonywild_ke alias @a

Meet Tamtam! Born in September 2019, Tamtam is the

A cat is being released after a rabies vaccination

Loijipu reaches out to the wildlife keeper at Sera